Whether it’s cute clothing, food, or anime, it seems Japan and it’s people have a nationwide obsession with anything cute. But is that actually the case?

Cuteness in Japan is not just a subculture, but a huge part of many people’s lives. A big part of it is the desire of escapism, especially with the horrendously long hours most people are expected to work in Japan as well as increasing societal pressures for both men and women.

You may think you like cute things, but I reckon you’ll be surprised with the lengths some Japanese people go to, to fulfil their kawaii destiny! 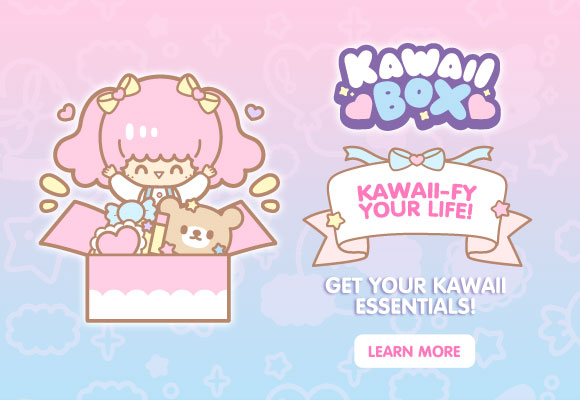 If you can’t get to to Japan but simply love the idea of having something cute or ‘Kawaii’ then this is easily the best option for you.

Each month you’ll be treated to between 6 and 8 products and the shipping is always free no matter where you live in the world.

If you’re looking to Kawii-fy your life, it’s the perfect subscription box for you!

What does ‘Kawaii’ mean?

You’ll often find ‘Cute’ things in Japan being referred to in Japanese as ‘Kawaii’.

Explain what it means, the Japanese letters, how it’s used, where it’s used etc

What I mean by this is that it’s a word often used to celebrate Japan’s love of ‘cute’. Anything adorable, charming, sweet, or endearing would usually wear the Kawaii badge with pride.

The history of Kawaii Culture

To fully understand Kawaii Culture, we need to go back to the beginning when the word was first defined by Lady Murasaki in the 11th century.

In her book ‘The Tale of Genji’, Kawaii was referred to as ‘Pitiable qualities’.

Fast forward about 100 years to the shogunate period and this is where we see women included or referred to under the kawaii term.

The older definition and word still survives today in modern Japanese. Kawaisō, which has a rough translation of ‘pitiful’ or ‘sad’ or ‘poor’. I like to think it’s similar to someone saying ‘aw, you poor thing’.

The 1970’s is the first decade we truly see the ‘kawaii aesthetic’ take a physical form.

This cute handwriting was a style of handwriting used by many teenage girls throughout the decade and often made it extremely difficult for teachers to read.

The main differences between Kawaii handwriting and normal writing were as follows:

Because of it’s difficulty to read, it was eventually banned in schools. It was a trend that spanned the entire country though, which meant it was far from gone.

During the 1980s, several teenage magazines adopted the writing style as well as comics, toy packaging, and clothing.

Now the kawaii aesthetic had been pushed into the mainstream and commercialised, there was no stopping its influence around not only the country but also the world.

Why do people enjoy kawaii culture?

There really are quite a few reasons why kawaii culture is still popular in Japan to this day, not least because it’s (rightly or wrongly) become a relatively big part of their national identity.

The reason that I would like to talk to you about is escapism.

Whilst working days are supposed to only be 8 hours long in Japan, it’s often the case that people work an extra few each day.

It may not seem like a lot, but it’s the work culture that’s the main problem. Constant pressure to perform at 100%, not to let your company or family down, and to stick to the status quo.

It’s no surprise then, that the younger generation look for ways to escape the system, even just for a moment.

So as well as their form of escapism, it’s also a way for many people to express themselves that they are unable to do in other ways.

The aesthetics of Kawaii Culture

With Kawaii being used to describe many things in Japanese culture, it’s hard to pin down an exact visual style linked to the word.

Much of what you’re likely to see in the Kawaii landscape will have some variation of the colors below.

Pastels are usually the most prominent colors with white playing a leading element in empty space. It’s also common to see a reduction in shadows to ‘increase’ positivity and happiness

The cutest things in Japan

Let’s talk a bit about specific things in Japan that fit the Kawaii definition.

Purikura machines are dotted all around Japan and are aimed largely at teenage girls. They are similar to the passport photo machines you might be familiar with, but also include the ability to add stickers, frames, and effects to the photo.

If you come across one in your travels, you’ll likely see lots of girls prepping at the makeup station (yep, that’s a real thing) before hand to make sure their pictures are absolutely perfect. Normally they’ll include hair dryer, straighteners, and huge wall mirrors.

Not necessarily for the ‘Kawaii’ aesthetic, but I still think kei cars are cute!

Similarly to the trains below, you’ll often find cars wrapped from roof to tire in some sort of crazy or cute pattern. Often that’s for promotional and commercial purposes, but there are a few exceptions to the rule.

Riding on the Hello Kitty train is a big Japanese bucket-list item for me, and I’m not even ashamed to say it…

Not only is it covered in Hello Kitty pictures on the outside, it’s also completely themed on the inside as well.

And it’s not only the bigger trains that look cute, you’re often going to see themed trains on the subway and local rail system too.

Incase you haven’t read the article on incredible Japanese instagrams yet, let me explain.

The above photo is of Japanese bento boxes created by @yuko.makotsy on instagram. She recreates famous Japanese scenes and culture, and my word do they look tasty!

To me, this is the epitome of kawaii food, and it’s honestly not too far off what you’ll. regularly find in Japan.

Big BIG eyes, airbrushed skin, and over emphasised emotions like crying or blushing.

It’s potentially the most well known part of Kawaii Culture that people don’t realise is a thing, if that makes sense?

Technically this girl is wearing lolita clothing which is a subset of Kawaii fashion. It doesn’t have to be this overt, it’s just this photo helps emphasise the point a little more.

If you’re interested in seeing this kind of fashion when you go on your trip to Japan, head to Takeshita street in Harajuku. Having been their myself I can happily let you know it’s well worth a visit!

I think it’s extremely clear that, Yes Japan does love cute things. In some cases this may only be for commercial purposes or a smaller demographic of society, but kawaii culture is still a widely accepted and loved sub-culture of the country.

Why is Japan called ‘The land of the rising sun’?

If you're from the western world, chances are high that you've heard Japan referred to as the 'Land of the rising sun'. But why…

Japan is a country that enjoys the journey as well as the destination. Both in a metaphorical and physical sense.…

Why Don’t Japanese People Have Beards?

If you’ve ever been to Japan, you may have noticed the distinct lack of facial hair pretty much anywhere you look. At first, I…

Why does Japan have small boxy cars?

A guide to Japanese Kei cars.…

What Makes Japan So Special?

Before I started this article, I couldn’t put my finger on exactly what it was that made Japan so unique and special. I seemed…

Why does Japan still use outdated technology?

On the surface, it’s easy to write off-Japan as a country of flying cars and robot butlers. However, as with countless things surrounding Japan,…

Exercise The Japanese Way (Without Going To The Gym)

If you live in the United States or United Kingdom, as most of you do, it’s likely you’re constantly bombarded with gym culture on…

Why do Japanese people sleep on the floor?

If you've only ever slept on western style beds your whole life, the prospect of sleeping on the floor may sound strange to you.…

Why Do Japanese People Sleep On Trains?

I'm pretty sure I can count on one hand the number of times I've fallen asleep on public transport.…

How many mountains are in Japan?

Quite often I find myself pondering strange questions about Japan. In the past, that’s led me to find out why Japanese cars are so…

Photographer, Magazine owner, Matcha drinker. One of these is definitely the most important, just unsure which...

Planning your trip to Japan is overwhelming.
That's why I made this site, to help people like you!
Plus, cultural information, buying guides, help learning Japanese and more!

Why is Japan called ‘The land of the rising sun’?